The Amazon Education Centre Christmas Appeal target of £1000 has been reached thanks to your immense generosity just a week after it was launched.

We’re sure there are more people who would like to help this great cause so we are keeping the Amazon Education Centre Christmas Appeal running as planned until the end of December.  With your support, we will be able to cover labour costs as well as materials for re-building and repairing Natütama’s Education and Visitor Centre in Puerto Nariño in the Colombian Amazon. 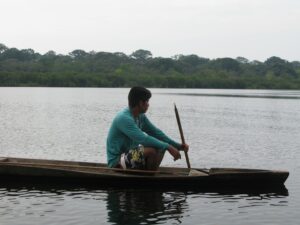 In addition to its environmental education activities with schools and the local community, Natutama carries out important long-term research into the habitats and lifecycles of endangered species such as manatees, river dolphins and turtles native to the Amazon.

The charity depends on local fishermen, with a lifetime experience of the river and its tributaries, to monitor the numbers of species, their breeding places, new babies and sadly deaths. 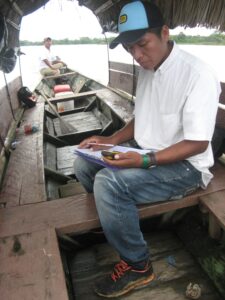 The data gathered from the monitoring operation provides information which can help protect threatened species through management, rescue or protection actions and education.  The data provided has been presented at international scientific forums and can help point to areas where further research is needed.

“We as a Foundation start from the conviction that we should not touch animals or disturb them with our activities. There are some exceptional cases in which an animal can be touched: for example, to free it from a fishing net or to remove it from a place where it is endangered by human activities.” explains Natutama.

Some of the endangered species on Natutama’s monitoring and conservation programme (taken from its website):

The Tikuna call it Omacha. It is the largest river dolphin in the world (approx. 2.80 m.). At birth they are dark gray and turn pink over the years. Instead of a triangular fin, it has a kind of hump; this and its flexible neck, allows it to swim among the roots of trees in the flooded forest. With its long snout, it can find its food in difficult places. It is not very common to see him make jumps out of the water, only the passage of his back and the sound of breathing are perceived on the surface.

It is one of the largest freshwater fish in the world, exceeding 3 m. in length, weighs up to 250 kg. It is characterized by its reddish coloration on the edge of the scales. When the oxygen in the water decreases, it takes the air out of the water, through your mouth. It feeds on fish. They form pairs and make their nests by digging at the bottom of the water or on the substrate. The nests are cared for by both parents and the young at birth swim attached to the head of the adult.

Natütama Foundation monitors catches and nest distribution in lakes and streams. Distribution of pirarucú in the backwaters of the Amazon River.

Threats: capture of small sizes, violation of the fishing ban, loss of habitat.

They are the three most important species of aquatic turtles in the Amazon. The female of the charapa reaches up to 90 cm., the cupiso up to 30 cm. and the taricaya up to 50 cm. The size of the nests and the shape of the eggs also varies by species: the charapa lays 70 to 130 round and soft eggs, the cupiso 13 to 15 oval and carraspous eggs, and the taricaya from 20 to 45 oval and soft eggs. In winter they are found in lakes, wells, pipes and flooded forest. In summer the females go out to the river looking for the beaches to nest. The cupiso and the charapa need the beaches to make their nests, the taricaya also uses the beach, but prefers muddy sites and ravines. What most affects the turtle population is the looting of nests and capture of females by humans.

Natütama Foundation monitors the distribution and abundance of charapa, cupiso and taricaya in the posture season with protection of nests and transfer of threatened eggs. Release of turtles into the lakes at 3 months of hatching. 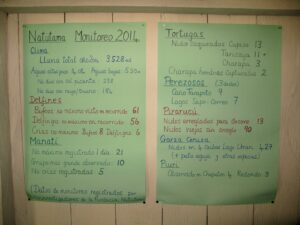