UK-based charity Children of Colombia was founded by Rachel Leighton in 2002 with five Trustees with a common desire to help children in need.  Rachel lived most of her life in Colombia and loved the country, particularly the rugged rural area where she grew up helping out with work on the farm, rounding up cattle on horseback, and in the home with domestic chores like churning butter and cooking for their large family.  Her other great love was children.  She combined both passions when she moved to the UK in 2000 and set up Children of Colombia.  Rachel sadly died much too soon and is greatly missed but her work goes on.  Chairman Kate Seal now heads a Board of six Trustees dedicated to continuing Rachel's legacy and securing a brighter future for the children in Colombia.

Children of Colombia has received support from around the world from individuals, businesses and research organisations.  Fund raising activities range from craft sales, coffee mornings and sponsored runs to talks and audio-visual presentations, concerts by The Antonius Players and our patron Louis de Bernières and book signings with celebrity chef, author and businesswoman Prue Leith and novelist Susan Lewis.

The people behind Children of Colombia 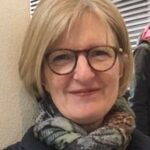 Kate lived in Bogotá for six years and has maintained connections with Colombia ever since, particularly with Fundacíon Fénix.  Whilst in Bogotá she was a committee member of the ABCC (Anglo Colombian Charity Association) where her job was to visit and assess the needs of the charities the Association supported.

Francisca was born in Colombia where she grew up very aware of the differences between the haves and have nots. She has been involved in fund raising for her mother’s day nursery for most of her life. Francisca came to live in England in 2000 and moved to the Cotswolds where she met up with her old friend from Bogotá, Children of Colombia founder Rachel Leighton.  Francisca is one of the original Trustees and has served as Treasurer and Chairman since Children of Colombia was founded in 2002.

Gwyneth lived in Colombia for three years and followed in Kate's footsteps as liaison officer for the ABCC where she got to know the charities we support. She uses her PR background to help promote Children of Colombia.

Bryony lived in Bogotá for nearly three years when her family was on posting with BP Exploration.  She enjoyed learning about life and culture in Colombia and met some of the young people in the outreach programme for street children. Bryony has a Master's degree from UCL, is a qualified accountant and keen to use her skills and experience to help others.

Alex spent most of her childhood years in Bogotá, Colombia before moving to the UK. Alex currently lives and works in Australia but visits her family and friends in the UK and Colombia regularly. Alex has been setting up a social media campaign to increase Children of Colombia's growing support network.

Originally from Colombia and now based in London, Antonia is committed to helping children in need in Colombia. Antonia holds a Master's in Education in Arts and Cultural Settings at King's College London and a Master's in French Literature from Université Paris IV-Sorbonne. She celebrates the charity's commitment to allocating funds efficiently and with no overhead costs and is looking at new fundraising projects.​

Antonia and Alex return regularly to Colombia to visit family and friends and make time to contact Luz y Vida, Fénix and Natütama to get first hand information of their work and plans.   Their reports and impressions are invaluable and help inform our policy decisions on funding.  We enjoy sharing their news updates and are always impressed and inspired by the excellent and very difficult work these three organisations are doing to improve the lives and futures of disadvantaged young people in Colombia.